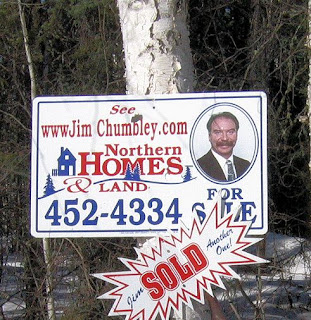 This realtor was a funny guy and a bit of a character. He had a round face with a prominent mustache. He had these commercials where he’d be standing with someone whose house he had sold, saying as he held up a SOLD sign, ‘If you want to have one of these on your house, (then holding up a company FOR SALE sign), you’ve got to have one of these on your house.’ Then the seller would say, ‘Jim sold my house in 3 weeks! Thanks, Jim!’ and they’d shake hands. As we sat upstairs in the cabin, having spent 5 minutes saying we wanted to sell and him deciding to buy it, I joked with him that this was way quicker than any of the sales in his commercials. He said, ‘Do you want to do a commercial?’ We agreed to do one, so a film crew showed up one day with Jim and his signs. He did his spiel with the signs and I said, ‘Jim sold my house in 5 minutes!’ Then Bill said, ‘Thanks, Jim!’ and we all shook hands. It was funny. No one had to know that he sold it in 5 minutes because he’d sold it to himself! We did get to see it once before we left. It was weird watching the news and then suddenly seeing ourselves in a commercial.
And so we prepared to leave Alaska. It was bittersweet. I loved Alaska, but I knew it was time to go and I was excited to see what would happen next. It was painful to say goodbye to Bentley and J Frost E, but they went to a good new home together. 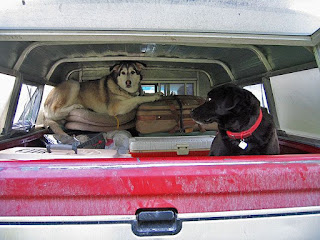 The two dogs and Pearl the cat were coming with us. Mikiruaq, the sled dog, was not good with change or being in a vehicle. She would get very agitated. The day we left, we’d gotten a later start than we wanted and it was afternoon before we were ready to get the critters and ourselves into the truck. First came Pearl. We had to get her into the cat carrier, so we played some sort of trick on her to get her in there. She glared at us in return, but she was safely tucked in, so into the truck she went. The black lab, Chunkman, was fine. He was very mellow and laid back. Miki the sled/bed dog was a different story, though. She was very agitated, even with the sedative the vet prescribed for her. She crawled under the cabin. We could not coax her out, even with food, although Chunk was happy to have a snack while waiting in the truck for her. Bill had to crawl under the cabin and get her. She kept backing up until something blocked her way and he was able to reach her. We got her into the truck and hoped she would settle in on the blankets and rest. She didn’t, but we were off. We crossed the border with no incident, but when we got to the place we’d planned to stay—the same place we stayed at the last night of our journey to Alaska a decade earlier, we found that they would not let us in with the dogs. So we drove on. It was late and just about dark when we saw the pull-out where a couple of RVs were parked. We pulled in there and tried to get a bit of sleep. We didn’t get much, because Miki was vocalizing a lot and we were trying to keep her quiet. When it got light a few hours later, I saw that our surroundings were breathtaking. There were craggy hills across the road with fog partially obscuring them. There was a bright blue lake behind us. It was some compensation for the twinge of sadness I felt at leaving the far north. We didn’t have time to linger and enjoy the views, though. We needed to find a bathroom and some coffee. Priorities, you know.
at Friday, April 09, 2021

bill burke
I am a freelance photographer who loves walking around taking photos of things that catch my eye. The subjects can vary from one photo to the next. I enjoy observing the ordinary and when it is becomes an image something changes that allows you to see so much more. That process is what I love.