When I got my acceptance letter from the PhD program at the university in Fairbanks, it was March. I still had a term to go in my MA program, a thesis to defend, and a job as a teaching assistant to complete. Our daughter was finishing her time in middle school. Bill was working graveyard shift. So we couldn’t move right away, but we could slowly start the transition. 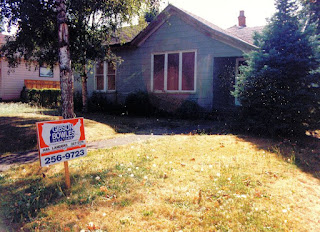 One thing we had to do was sell our house. We had a small house on a corner double lot that had two large maple trees on the side and a couple of tall birch trees plus three large plum trees out front. It was a great little house, but it was dated (built around 1900) and would have had code issues. For example, it still had fuses instead of circuit breakers. When we bought it, it was an owner finance situation. We had a 10-year contract and had lived there for 7 years. It’s amazing to think we only paid $30,000 for it—people spend more than that on cars these days! During the time we lived there, the area was becoming desirable and we had regular cold calls from strangers asking if we would be interested in selling.
Because we had a double lot, there was a bit of space between us and our next door neighbour. On the other side of his very small house was one that was like the others in the neighbourhood—two floors. The same people we bought from had owned all three houses. The neighbour (I’ll call him Grouchy) had bought his from them and the people on his other side were renting. We avoided Grouchy, but were friends with the people on his other side.  Grouchy used to complain about many things, both real and imagined. He once knocked on our door and yelled at me because he heard our dog barking when we locked him up in the garage. I informed him that we never put our dog in the garage and he sputtered that he heard a dog barking. Not my dog, dude. He complained to our friends that he could hear the kids when they went up and down the stairs and the water going through their pipes. Grouchy had some issues.
One day, he bumped into Bill outside. When Bill mentioned that we were going to move, Grouchy told him he was interested in buying our house on a contract and he was ready to talk about it when Bill was. When Bill said we weren’t in a position to do owner-financing, Grouchy got testy and told Bill to come back and talk to him when we couldn’t sell it any other way.
Bill dealt with the selling of the house, because he was home during the day. He called a realtor and set up an appointment. The guy came and said that because of the code issues, he couldn’t sell it, but knew someone who would probably be interested. The guy came to look at it. He told Bill an involved story about how he wanted to buy the house for his daughter, who was newly remarried after an abusive relationship and he wanted to give her and his grandson a new start and blah, blah, blah. He gave us what we wanted for the house, paid us in cash in early May, and then let us stay there rent-free until the end of June. Because of the term times at my university, I would not be done with my final term until early June. Grouchy was disappointed.
Selling our house in the way we did made it easier to go to Fairbanks and find a place to live there, so in mid-May, we went there and talked to a realtor. When he heard our story, he said he thought he had the right place for us and brought us to a funky house three miles up the hill from the university. It was a round house on 3 acres in the woods. The owner wanted to do a contract. The terms of this were favourable, so we bought the house. Since this all happened on the first business day we were there, we still had most of the week to explore the area a little bit. It was exciting. 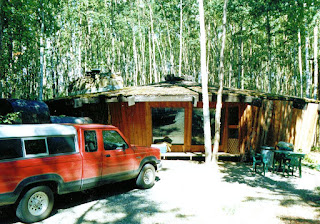 When we moved into the house, we found some slides showing the process of building it. It wasn’t a ‘regular’ house. The guy we bought it from had been a math teacher and this was a kind of experiment, we were told.  He had had a totem pole carved in Ketchikan and transported to Fairbanks, where it was painted then erected in a cleared area of the woods. The rest of the house was built around it. Metal girdles were strapped around the top and the bottom and then wooden beams places at specific intervals coming out from the totem pole. The house was round and the outside walls sloped inward from top to bottom. Inside there was a large living room/dining area/kitchen that took up a bit more than half of the circle, with the totem pole in the center. There were two bedrooms and a bathroom along the edge of the other semi-circle and a utility room in back. Outside, there was a porch that wrapped around part of the house, with doors on either side that led to arctic entries from which one could enter either the living room or kitchen. It was a fun house in a great location. 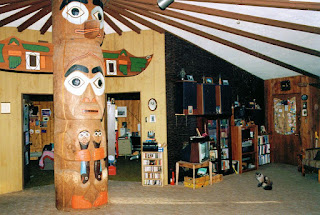 We did a bit of research and discovered that the totem pole was a replica of the Chief Johnson pole in southeast Alaska. It depicted the story of Fog Woman and Raven. In short, the story goes that Fog Woman knew how to call the salmon to her and Raven liked this, so cozied up to her. Eventually, they got married and Raven’s greed got the best of him. He started to berate her for not bringing enough salmon and once, in a rage, he hit her. She told him off and left. He chased her, but she slipped away, like fog, into the ocean. The salmon followed her and Raven was left to be lonely and hungry. Serves him right!
We were not yet done with Grouchy, though. Shortly after we moved in, we got a phone call from him 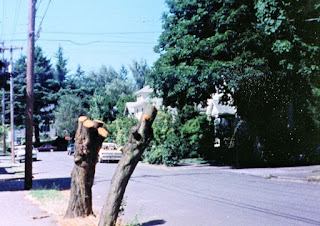 —pretty much the last person in the world I would have expected to her from. He complained about the guy who bought our house, saying that he had gotten permits to trim the beautiful plum trees and had ‘trimmed’ them down to stumps. He was fined and prevented from doing anything to the maple trees. Grouchy was threatening to sue. I told him to take it up with the person who now owned the property, since there was nothing I could do about it. He ranted for a while, told me I hadn’t heard the last of him, and hung up. I never heard from him again. 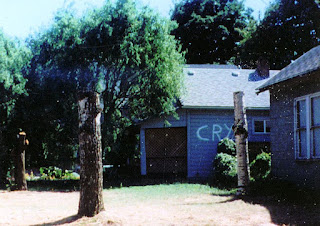 Turns out the guy had lied to us about why he wanted to buy the house. His real plan was to knock down our house and build two houses on the double lot. I could see why Grouchy was upset. Now there would be two new tall houses on the lot, one of which would be right next to his bedroom window, not to mention all of the noise of construction. Still, it seemed a bit strange when he painted the word ‘CRY’ on the side of his wee house in protest. 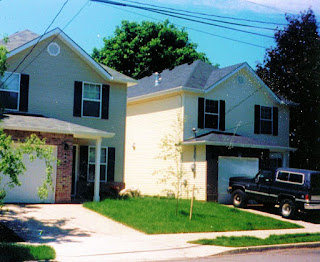 A few years later, we were in Portland on our way to a university further south, where we’d been invited to give presentations, and we decided to drive by and look at the houses that had been built. They were so ugly, with pale yellow aluminum siding and black shutters—they looked so out of place in that old neighborhood. I don’t know whether Grouchy still lived in the little house that was still there, dwarfed by the tall homes that surrounded it. It was kind of sad, but we had good memories of life in the house that used to be.
at Wednesday, January 13, 2021

bill burke
I am a freelance photographer who loves walking around taking photos of things that catch my eye. The subjects can vary from one photo to the next. I enjoy observing the ordinary and when it is becomes an image something changes that allows you to see so much more. That process is what I love.